A great and to-the-point fundamental analysis of why coffee prices are as low as they are and where they could be headed, which could be sooner rather than later we believe at SpillingTheBeans. The comment is written by Donald Levit, a strategist for the online finance and investment forum economiccalendar.com where he specializes in a fundamental approach while informing traders of relevant economic data. Actively trading since university, Donald trades indices and commodities. He earned his Bachelor’s in Finance from Baruch College’s Zicklin School of Business in New York City. As Levit points out, it won’t take much for prices to rebound, and with ongoing severe droughts both in Brazil’s Nr 2 producing state of Espirito Santo as well as in Vietnam, we firmly believe this will be sooner rather than later. 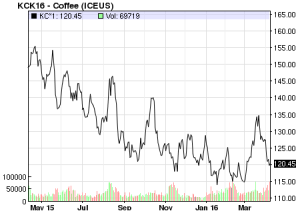 APR 5, 2016–Arabica coffee futures are under pressure on the expectation for high yields from Brazil’s upcoming harvest. Arabica coffee futures closed Monday’s session down 3.5% at $1.228 per lb. During the session the commodity fell to $1.223, its lowest price point since March 19. During Tuesday’s session the commodity saw more selling interest, falling as low as $1.215 per lb, its lowest price point since March 10.

From a technical perspective, selling pressures are mounting with both technical indicators and moving averages indicating that further losses can be expected. Even though prices fell toward a one-month low on Tuesday, support is not gathering until the $1.2068 price point. The $1.215 per lb. price point is near the commodity’s level of resistance.

It is expected that the upcoming crop in Brazil will show high yields. But, the expectations for a bumper crop are so rampant that the yields have to be high or the commodity could face some selling pressure. Also, solid yields are needed to replenish supplies. Brazil sold most of its coffee inventories when the real plunged compared to the U.S. dollar. With coffee futures prices in U.S. dollars, the real’s fall relative the U.S. dollar meant that Brazilian coffee growers could make more money selling with a weak real. Now, without strong yields from the incoming crop the coffee market could swing to a deficit and this would cause a big upside for arabica prices. Arabica coffee inventories tracked by ICE are currently sitting around their lowest levels since November 2011.

While the market continues to expect a big Arabica crop, the prospects for robusta coffee production are poor. Robusta’s top grower is Vietnam and a bad drought in the country damaged the crop. Robusta has recently seen some spill-over selling pressure from arabica, but prices are trading around a 3-1/2 month high.