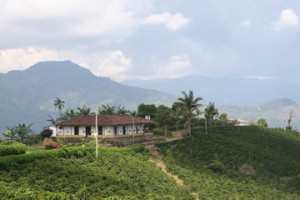 Coffee remains one of the most important economic activities in Colombia. An estimated 563,000 producer families depend on growing coffee for their main or partial daily survival and coffee is cultivated in 20 of the country’s 32 departments, according to the National Federation of Coffee Growers, or Fedecafe. The biggest coffee growing department, or province, has for years been north-central Antioquia which traditionally has accounted for about 18 percent of total national output, of which an important part is grown at bigger estates like the one seen in the picture here. During the last decade, however, the southern province of Huila has quickly emerged as a top producer of both volume and quality with between 14 and 16 percent of the total Colombian production today, according to Fedecafe.

The Onset Of Colombia’s Coffee Crisis Started In 2008
ORIGIN FOCUS: COLOMBIA – A Leader In The World Of Coffee!