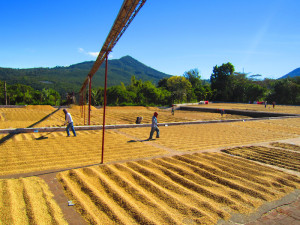 FEB 13 (SpillingTheBeans)–El Salvador’s new 2013-14 coffee harvest is unlikely to yield more than 554,300 60-kilograms bags, down a stunning 58 percent on the output in the last 2012-13 crop year, the official Salvadoran Coffee Council said on Thursday.

In a strong reminder to the market of the ongoing rust disaster in Central America, the Council said the total harvest based on picking through Jan. 31 had reached an all-time low of just 447,503 bags. Local industry officials in Salvador told SpillingTheBeans that many growers were recording yields as low as 3 to 4 bags per hectare because of the continuing negative impact of coffee leaf rust, a pest that has devastated coffee producing areas across Latin America from Southern Mexico to Northern Peru.

The new forecast also represents a sharp cut to the initial forecast for the new crop to yield 820,333 bags, but as the harvest has been advancing the Council said it had become clear that a large part of the cherries did not develop properly into mature beans and this is now resulting in significantly lower yields.

During the 1990s El Salvador’s coffee growers produced an average between 2.4 million and 2.5 million bags in annual output, but since the coffee crisis hit in 2001, when world prices collapsed to historic lows, the industry has struggled to recover. In the 2010-11 crop cycle the Salvadoran harvest yielded 1.86 million bags — the biggest crop in over a decade — only the next year to be hit by the most severe outbreak of coffee rust in history in Central America.