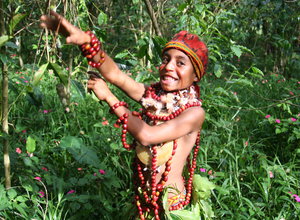 In the photo, a tribal welcome in a remote coffee community in Papua New Guinea

One of the world’s most isolated and mystical countries in the world of coffee, Papua New Guinea has long been famous is for its bluish-green beans which are on par with the highest quality grades for coffee found anywhere in the world. It is also one of the few producing countries that have seen production stay largely stable throughout the last decade when most other coffee nations have gone through social crisis and slumping output figures. But holding an unmatched potential for marketing with hundreds of colorful tribes involved in coffee growing, the local coffee industry is drawing up plans to make the world rediscover its coffees and boost productivity.

Words like fascinating and mysterious don’t even start to describe the incredible cultural diversity to be found in Papua New Guinea (PNG). And as those who love their coffee know well, when it comes to quality beans, this isolated Pacific nation has a stellar reputation.

The good news for coffee lovers familiar with PNG’s coffee is that the harvest for the 2013-14 crop year is coming in well above the last crop, which was one of the lowest in history.

While figures for total production in the past 2012-13 crop cycle are still being revised, the best-case scenario for that harvest has the final result at 850,000 bags. However many local coffee industry officials say the actual amount of coffee harvested and processed for shipment only reached 650,000 bags. This shortfall was caused by a mass labour shortage at the peak of the harvest as many workers picked up casual jobs in the 2012 general election campaign. 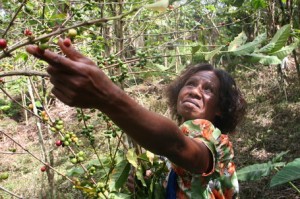 Driving across the coffee provinces of Jiwaka, the Western Highlands and Simbu to Kainantu in the eastern-most part of the Eastern Highlands – four provinces that alone account for over 90 percent of Papua’s total annual production, the Colbran Estate is one of the few privately-held farms still active in this earlier prime region for the Papuan coffee sector.

“The new harvest should definitively get us back to production between 1 million to 1.1 million 60-kilogram bags,” says Navi Anis, Chief Executive Officer of the Coffee Industry Corporation (CIC) of PNG.

Kilometer after kilometer reveals a sad sight to coffee lovers with abandoned or semi-abandoned former private estates marking the rule rather than exemption. Land disputes and tribal disputes are blamed for most of the formerly private estate being left by their original owners and now being in a no-man-land’s territory as authorities are trying to find adequate solutions to re-activate the land.

“The farm here was started my grandfather Ben Colbran who was one of the first to embark on plantation grown coffee here in 1965. There used to be over 50 private estates in this region alone and now there is less than handful left,” said Nick Colbran, 3rd-generation coffee grower at the estate, which is also known as the Colbran Coffeelands or the Baroida Estate. 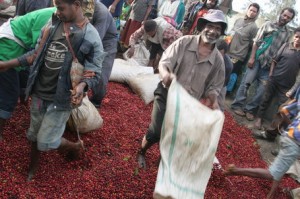 In the photo, perfectly picked red Cherries at the Colbran Estate

While the volume of estate coffee has gone down in Papua New Guinea, there is no disputing to the excellence in the quality of the coffee grown at estates such as the Colbrans. Arriving late in the afternoon hundreds of pickers are lining up at the wet mill to have their coffee weighed and processed. Few farms in the world will be able to compete with the flawless standards maintained as one bag of perfectly picked ripe cherries after each other is opened and loaded unto the washing tank. From picking to washing, from drying to processing the beans are meticulously sorted at every step of the long road from seed to cup.

For the full article, please go to:
http://globalcoffeereview.com/market-reports/view/papua-new-guinea-aims-for-growth
-0-

SPECIAL REPORT: Trending in Specialty Coffee, Decaf is Anything But Dull
Rains below average in minas gerais care coffee producers