FASCINATING FACT – What Country Is The Oldest Coffee Producer in The New World? 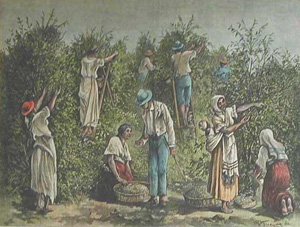 Arabica coffee was first discovered growing in the wild in southwestern Ethiopia somewhere between the 8th and the 12th Century and by the 14th Century coffee was known to be commercially cultivated in Yemen thanks to Arabian merchants. But what country is the world’s oldest coffee producing nation after coffee leaves what was then Abyssinia and the Arab Peninsular and start spreading to the Colonial world? The fascinating answer is Dutch Ceylon, what today is Sri Lanka, where coffee cultivation can be traced back an amazing 355 years.

A Dutch merchant, Pieter van der Broecke had succeeded in obtaining Arabica seedlings from some of the closely guarded coffee plantations in Mocha as early as 1616 and brought the small plants back from Yemen to the Netherlands. But it would take another 42 years before the Dutch had achieved to make Arabica coffee grow in the botanical gardens of Amsterdam and bring them out to their colonies in Dutch East India.

In the late 1880s Sri Lanka’s coffee farms were almost entirely ruined by the crop pest “coffee leaf rust” and most farmers switched to tea instead, but Sri Lanka still produces coffee and today has annual output of between 30,000 and 35,000 bags.

The picture is of unknown origin but is of a painting that shows early coffee picking in Dutch Ceylon.

Coffee of The Day: Tanna Island From Vanuatu in the South Pacific
SPECIAL REPORT: Vietnam’s Coffee Industry Headed For A Future of Quality and Sustainability