In this fascinating article for the New York Times writer science writer Carl Zimmer explores some of the latest research on the genome of coffee related to caffeine and the plant evolution, and why caffeine in coffee differs from that found in other products like tea and cocoa. A fantastic and highly recommended read written in a very boiled down and easy language despite the complex science behind. 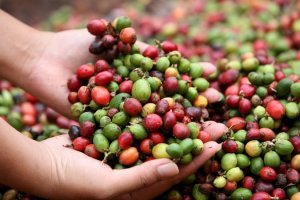 Coffea canephora, also known as robusta coffee, drying in Laos. Scientists have sequenced its genome to understand how it evolved the ability to produce caffeine. Credit Barbara Walton/European Pressphoto Agency

SEPT. 4, 2014 (New York Times)–Every second, people around the world drink more than 26,000 cups of coffee. And while some of them may care only about the taste, most use it as a way to deliver caffeine into their bloodstream. Caffeine is the most widely consumed psychoactive substance in the world.

Many of us get our caffeine fix in tea, and still others drink mate, brewed from the South American yerba mate plant. Cacao plants produce caffeine, too, meaning that you can get a mild dose from eating chocolate.

Caffeine may be a drug, but it’s not the product of some underworld chemistry lab; rather, it’s the result of millions of years of plant evolution. Despite our huge appetite for caffeine, however, scientists know little about how and why plants make it.

A new study is helping to change that. An international team of scientists has sequenced the genome of Coffea canephora, one of the main sources of coffee beans. By analyzing its genes, the scientists were able to reconstruct how coffee gained the biochemical equipment necessary to make caffeine.

Caffeine starts out in coffee plants as a precursor compound called xanthosine. The coffee plant makes an enzyme that chops off a dangling arm of atoms from the xanthosine; a second enzyme adds a cluster of atoms at another spot. The plant then uses two additional enzymes to add two additional clusters. Once the process is complete, they’ve turned xanthosine into caffeine.

The evolution of caffeine in coffee started when the gene for an N-methyltransferase mutated, changing how the enzyme behaved. Later, the plants accidentally duplicated the mutated gene, creating new copies. Those copies then mutated into still other forms.

When coffee leaves die and fall to the ground, they contaminate the soil with caffeine, which makes it difficult for other plants to germinate. Coffee may thus use caffeine to kill off the competition. Coffee plants also use caffeine to ward off insects that would otherwise feast on their leaves and beans. At high doses, caffeine can be toxic to insects. As a result, insects have evolved taste receptors that help them avoid ingesting caffeine.

But coffee and a number of other plants also lace their nectar with low doses of caffeine, and in that form, it seems to benefit the plants in a different way.