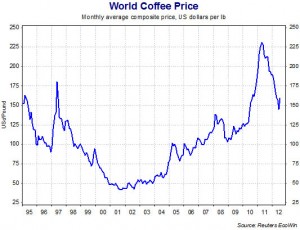 July 10 (SpillingTheBeans)–Investment and pension funds continue to hold net short positions near record highs worth 33,000 lots, or the equivalent of between 9.2 to 9.5 million 60-kilogram bags in green coffee, latest data from the U.S. Commodity Futures Trading Commission through July 7th shows.

This is close to the record high of about 39,000 net short positions, or the equivalent of some 11 million bags, that non-commercial funds held in February and March. But since liquidating some 5-6000 positions in late March the funds have maintained the current numbers since any significant change for over three months.

This leaves the market particularly vulnerable to any unforeseen weather upsets, which show what many traders increasingly say is a complete disconnect from the reality of supply constrains in most producing countries.

“This market is so disconnected from the fundamentals day to day and the enormity of the Fund Spec short position makes me very nervous,” said a veteran trader in the New York Arabica futures market.

Traders say that despite a big Brazil crop and a comfortable source of supply for the next 8-10 months ahead, weather problems in the world’s other top producers Vietnam and Indonesia combined with the biggest outbreak in history of rust disease in Central America leave the overall world production fragile.