The new coffee harvest in Vietnam, the world’s second largest grower and exporter, is unlikely to meet market expectations for a bumper crop. In November 2015 SpillingTheBeans visited Vietnam to see first hand what the situation looks like in the world’s 2nd largest coffee producer — this was our 23rd visit to Vietnam since 1993. Despite numerous trade reports playing up the idea of a potential record, a trip to Vietnam’s key coffee growing regions quickly reveal that the state of old trees is in bad shape and the average yields in the new 2015-16 crop could be the lowest the South-East Asian giant has seen in 30 years. In this special report written by SpillingTheBeans for the GCR Magazine’s January 2016 edition we analyze what the prospects are for Vietnam’s new harvest. 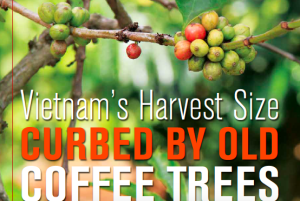 JAN. 2016–Vietnam’s coffee farmers are facing an increasingly difficult challenge when it comes to keeping up with the history of being the world’s most efficient grower. With over 30 percent of the entire Vietnamese coffee park between 20 and 30 years old and only little replanting carried out in the past five years, the old trees are taking a visibly heavy toll on the new 2015-16 harvest.

In addition to old trees, a drought earlier in the year also caused bean size to drop significantly and low prices for most of the past year has not encouraged growers to fertilize fields, rather starting to replace ageing coffee trees with pepper or other crops.

“The Central Highlands provinces have in the 2015-16 crop year faced drought, which caused a severe water shortage by a reduction of 10 to 30 percent in the rainfall compared to last year. The weather was unusually cold and we also saw many coffee plants infected with a ‘flu’ when flowering which caused dropped leaves, and the area was also affected by frost,” said Luong Van Tu, Chairman of the Vietnam Coffee and Cocoa Association, Vicofa, speaking to GCR Magazine at the group’s headquarters in Hanoi.

Adds Van Tu, close to 48,000 hectares of coffee alone in Dak Lak suffered from inadequate water between May and July in the period when cherries were going through the crucial bean formation stage. The drought hit the entire Central Valley region also including the provinces of Lam Dong, Gia lai and Dak Nong – which together with Dak Lak account for between 85 and 90 percent of Vietnam’s annual crop. 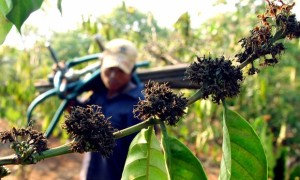 It’s irregular weather such as this which for the past two years have caused a significant reduction to the initial forecasts for the Vietnamese crop and which by all counts look set to also negatively affect the new 2015-16 harvest. Despite the rosy outlook given by many multinational trading houses, which still say the new harvest from Vietnam can reach up to 30 million bags despite the adverse impact of the drought.

But local exporters and producers agree with Vicofa and say the new crop could be as low as 22 million bags, in part because of weather but much more importantly because of poor yields from old trees. 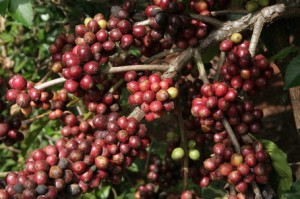 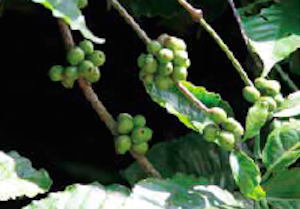 The dwindling Vietnamese yields as trees are old and unproductive, yields in 2012 vs 2016

“Look at these trees, there is lots of leafs but very little fruit, all these farms here will at the most be able to produce 1 metric ton of green beans, and for a lot of the farmers it may even be as little as 800 kilograms,” said Ngoc Quang who constantly is on the road across Dak Lak and Lam Dong for Intimex, one of Vietnam’s biggest coffee exporters. In most of the world’s producing countries yields of 800 to 1000 kilograms would be considered a good or even high yield from small growers with little access to training or financing for inputs such as fertilizer. But in Vietnam, where most of the last 30 years’ consistent coffee growth is based on intensive farming practices and at least 3 rounds of fertilizer, yields for many small farmers used to reach a minimum 4 to 6 tons, and it was not unusual to meet small farmers who would be able to get as much as 8 tons from 1 hectare of land. During the initial boom-area of Vietnam’s coffee sector during the mid-1990s coffee growers in Vietnam became known locally as “the coffee kings” and coffee was the crop to plant. But today this is quickly changing.

“All these farms are small growers that used to produce at least 5 or 6 tons per hectare up to about 2005 when yields started to decline dramatically because of the lack of investment into replanting,” Quang told GCR Magazine during a visit to Dak Lak at the end of October.

Driving over 100 kilometers through the back roads of the Buon Ma Thuot coffee lands in the Central Highlands the sight of the once so impressive Vietnamese coffee yields is simply said not looking good. Trees with actual decent yields can be counted on one hand in the few farms passed along the road. 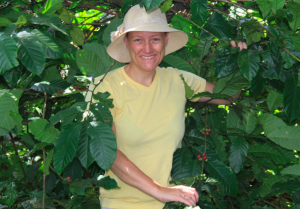 For a country like Vietnam, which for years has been known as the world’s most efficient producer with average yield per hectare of cultivated land reaching as much as 38 bags of 60 kilograms of green coffee, this is a both sad and worrying development and touring the main producing region of Dak Lak which in its prime of production accounted for up to 40 percent of Vietnam’s entire harvest. Today these figures are down to 30 percent at the most and according to Vicofa, approximately half of the total area of some 200,000 hectares in Dak Lak province alone has not seen any renovation since the trees first were planted during the 1980’s and 1990s. On a national level Vicofa estimates that 30 percent of the coffee farms are now covered with old need in urgent need for replanting.

“Most of the buyers and multi-nationals today only take visitors to the area of recently replanted coffee farms supported by companies such as Volcafe and Ecom, but that are of 100 percent new coffee represent less than 10 percent of the coffee area of Dak Lak so this does not give a good idea of the real situation and how the old trees are affecting production today,” said Quang, who like many Vietnamese in Buon Ma Thuot has been around and worked in coffee since the crop was first planted here and seen the developments first hand.

“In Vietnam today, coffee is not necessarily a first choice for a farmer when he considers where and how to invest his money and land, we have a lot of options and there are many other products like pepper that can yield much higher economic returns for the farmers,” he said.

Passing one farm after the other, coffee trees are either replaced partially or entirely by pepper, or bare wooden trunks to support the new young pepper vines quickly taking over entire areas of what used to be all coffee lands. 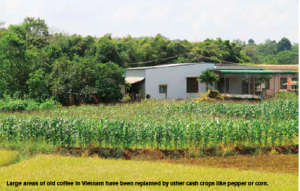 When Arabica coffee prices reached between $2 and $3 dollars per pound in 2010 and 2011 growers accounting for an estimated 30 percent of the land under coffee in Dak Lak province started replanting parts of their farms. But as international prices in the last year has dived to levels not much above $1.15 a pound, producers have swiftly changed their plans for coffee, or part of their coffee, to be replanted by other crops. While yields remained healthy up until the 2012-13 harvest thanks to intensive agricultural practices and the application of fertilizer at least three times a year, this last year saw a sharp reduction in inputs.

“I first planted this coffee 20 years ago and when the plants were new I could easily get up to 6 tons per hectare, even up until two years ago I could still get 2 tons, but the last year prices have been very poor and fertilizer is very expensive so I am starting to plant pepper instead,” said Phan Hung, a small grower with 2 hectares, speaking to GCR about 20 kilometer from Buon Ma Thuot on the road toward Lam Dong. 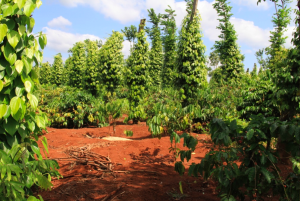 Industrialization and urban growth is another factor that locals also say is pushing coffee back and where visitors up until just a few years ago could see coffee along the road from just outside Buon Ma Thuot, Vietnam’s undisputed coffee capital and trading center, the coffee farms today don’t start emerging until several kilometers behind the interior of the roads outside town. Shops and commerce are now taking the front row, benefitting from the rise in local spending power.

Vicofa has warned the market not to over-estimate the new crop, saying total production in the new 2015-16 harvest could be as low as 22 million bags due to the many problems affecting the crop, adding that stocks are not as high as many in the market would like to believe because the last 2014-15 harvest ended well below forecasts too.

“The 2015-16 coffee production is expected to be lower than the 2014-15 crop and this will be the 2nd consecutive coffee crop year with a production decline,” said Vicofa in a statement released just before the new harvest started last October. It said the 2014-15 harvest ended 20 percent below initial estimates at just 25.5 million bags due the combination of bad weather and old trees. Vicofa has warned the market not to over-estimate the new crop, saying the official projection for production in the 2015-16 harvest is set at 21.7 million bags.

This would be the lowest crop in five years since the 2010-11 harvest of 20 million bags, statistics from Vicofa, the International Coffee Organization and the U.S. Department of Agriculture show. 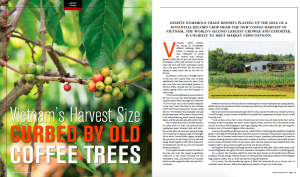 Many local exporters and producers believe the last harvest was as low as 25 million bags but that the shipment of carry-over stocks that added to the export volume have given the market a false impression of the real crop size. This is not surprising, industry officials and analysts agree. Since Vietnam officially became the world’s 2nd largest coffee grower after Brazil 15 years ago the market has engaged in speculation as rife about Vietnam as seen in Brazil when it comes to predictions for crop size.

As the world’s largest grower Brazil at the same time continues to struggle with the negative impact of drought, the market will increasingly –and increasingly soon– be looking to Vietnam for filling the gap. But while Vietnam and Brazil between each other for most of the past 10 years together have been able to come the market to rescue every time production took a dive elsewhere, this year it is unlikely that any additional crop will be available. And this is happening at a time when world demand continues to expand by between 3 and 4 million bags a year.

Small pockets of hope remain, however, and no one doubts that the hard working Vietnamese coffee growers will get the crop back on track. New production from trees replanted in the last 3 to 5 years are expected to start reaching the market starting in the 2016-17 cycle, if weather permits for a normal crop development.

While climate change is expected to continue to bring on increasing challenges to growers, Vietnam’s coffee industry remain hopeful that the renovation efforts and replanting programs of old trees that have started in the last few years will make it realistic for Vietnam to increase its annual production to at least 30 million to 32 million bags in the next five to 10 years.

Maja Wallengren first visited Vietnam in 1993 and had written about all aspects of the Vietnamese rise in coffee since then through 23 trips across the South-East Asian grower. She can be reached at: mwallengren@outlook.com