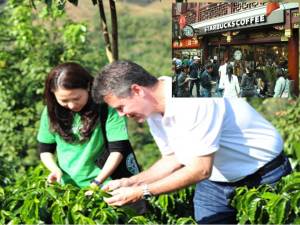 It made global headlines when Starbucks last year announced it was going to get involved in coffee production with the first farm to be set up in China and it’s no coincidence either that Starbucks chose to do this in Yunnan’s Pu’er coffee region. Since the early coffee beginnings in China, Yunnan province was identified as one of the most suitable areas for growing coffee due to its mountains and highlands located in part of the world’s highland tropical coffee belt right between the latitudes known as the Tropic of Cancer and Capricorn. Part of a wave of new coffee plantings in China, the Starbucks plantation is by far the most ambitious project with the first coffee from the 243-hectare Starbucks plantation in Pu’er expected to start reaching the market during the 2015-16 harvest year.
-0-