The birthplace of Coffea Arabica, Ethiopia’s coffee has always had a unique place in the market. Specialty roasters will have at least one or two different coffees from regions such as Sidamo or Yirgacheffe among their offerings to all those coffee lovers desiring a spectacular cup of Joe. Yet for all the fame, these beans are highly underpriced in the market compared to most other specialty grade coffees. In this special article about Ethiopia published by El Mundo del Cafe we analyze the steps Ethiopia’s coffee industry is taking to seize a bigger share in the specialty market and are excited to reveal the news that the Harar and Kaffa regions – the world’s OLDEST coffee producing regions – are returning as reliable sources of supply in a fascinating comeback for the specialty market. 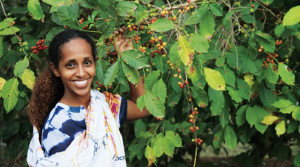 The world’s oldest coffee grower is getting back in business. Since coffee was first discovered growing in the wild of the Ethiopian forests of what constituted Southern Abyssinia in the 6th century, coffee cultivation keeps evolving. Through changing dynasties, English occupation and Italian colonization, coffee growing has always continued to grow and expand. But it wasn’t until a little over 10 years ago that the combination of new market friendly reforms and private investments started to inject fresh life into Ethiopia’s coffee industry.

“Ethiopian coffees have two major advantages over all other coffees in the world because of the incredible genetic diversity and near perfect growing conditions that is found there,” said Geoff Watts, vice president of coffee at Intelligentsia Coffee, a Chicago-based roasting company.

“The environment here plays a role as it has to be ideal for coffee production, which Ethiopia is endowed with. Ethiopia is one of the few producing countries in the world that nature has gifted in this way to produce some of the best qualities, a large share of which easily qualify as specialty,” Jemal Ahmed, Chief Executive for Horizon Plantations, told El Mundo del Café in an interview.

Horizon Plantations are part of the MIDROC Group which owns and operates a total of 25,000 hectares of coffee farms across Ethiopia. With the national production up over 50 percent in the last 10 years and continued growth projected for the next years to come, from growers to exporters the debate is increasingly centered on the future of Ethiopian coffee in the specialty industry.

“Ethiopian coffee is special by definition, not only in its uniquely placed Appelation Controllee, but also in its unique taste profiles that are achieved despite poor agronomical practices in many farms,” Heleanna Georgalis of Moplaco Trading specialty exporter in Ethiopia said. The notion that Ethiopian coffees are simply “too cheap” is a phrase often heard among buyers in the global coffee industry, especially compared to top-priced specialty grades from countries such as Guatemala and Costa Rica, both foreign and local traders agree. “Ethiopian coffees are certainly undervalued for what they are worth. This has to do with many things including poor promotion work and marketing effort to make the already existing specialty and diversified coffees that the country produces known,” said Ahmed, adding, “The Geisha story is a good example in that countries like Panama manage to attain the highest return from this coffee whereas it was Ethiopia that gave this variety to the world but has not properly used the marketing advantage it has over the Geisha or other varieties.”

Travelling through Ethiopia’s abundance of specialty coffees is a never-ending journey of fascinating names and regions with an almost mythical edge in the world of coffee. Extraordinary and rare coffees are everywhere; From the unique cupping profiles of southern Sidamo and Yirgacheffe, across the central coffee highlands of Jimma and Limmu, to the isolated northern Lake Tana home to what is known as the Monastery island coffee. 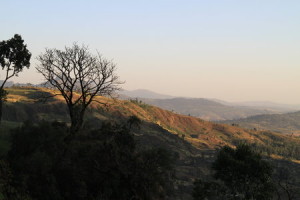 The Eastern Harar mountains of Ethiopia

Driving straight east from the capital of Addis Ababa, visitors arrive in Harar near the border with Somalia. This is where Africa meets the Arabian world and where Arab traders first started to cultivate coffee on a commercial scale. The inner center of this famed walled city is a labyrinth of tiny souks and according to the United Nations Educational, Scientific and Cultural organization, UNESCO, is considered the fourth holy city of Islam and dates back to the 7th century. The coffee here is rare in all aspects from flavor to the history it embodies. While many consumers start their love affair with Ethiopian coffee through the introduction to the beans from Sidamo or Yirgacheffe, the more adventurous coffee lovers quickly find themselves moving on to Harar. Famed for its elegant berry and winy cupping profile, this region is still stuck deep into mountains where farms literally are found in valleys carved out of dense rock.

Harar coffee accounts for only a fraction of the total Ethiopian crop, which makes it an even more rare specialty grade to importers than other beans from Ethiopia and it’s one of the regions where renovation efforts are starting to produce results, said Orit Mohammed. A Harar native herself, Mohammed todays run Boon Coffee importers and specialty roasters of Ethiopian coffees based in Dubai, the commercial capital of the United Arab Emirates and the heart of the booming coffee culture in the Middle East.

“When you go to Harar today, and any other coffee region for that matter, you see the renovation going on and you see that coffee farming is being done correctly, that farmers are applying new agricultural practices to the way they grow coffee,” she told El Mundo del Café during a recent crop visit to Eastern Harar. 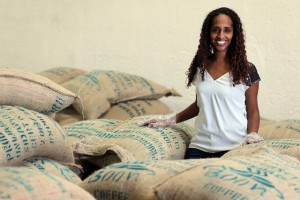 “And it’s definitively working because not only do you see much more coffee coming out of Harrar these days, but you also note it in the quality and how the Harar coffees reaching the market now are coming back to the blueberry and wine taste it used to be so famous for,” said Mohammed. With the Harar crop only contributing with 7 percent of the national production, getting 100 percent single origin Harar coffee is not without its challenges for buyers, but “the quality is so good so when you are lucky enough to get a pure Harar coffee you really can’t beat that as far as quality is concerned,” she ads. SpillingTheBeans drinking Harar coffee in the old town of Harar

From the 13th century city gate of Harar to the deep wild forests of the South-Western Kaffa region, Ethiopia’s coffee industry has today completed the circle with most of the new production and investment now being directed back to the roots of coffee. It was here in the Kaffa province that legend has it a goat herder named Kaldi discovered coffee after observing his flock’s rising energy levels upon eating the red cherries of the green bushes. “Do you want to stop for some Buna,” asked Addisu Beyene Tifferi, a coffee grower who we accompanied to the forests where coffee still grows in nature so wild that white-tailed Colobus monkeys, baboons, buffalos and leopards roam farms on a daily basis. “The government was really eager to attract investors to the coffee sector. Most of the land available was generally here in the Kaffa zone, and I wanted to do something on a more permanent basis, not just for me but for the people who live here,” said Addisu.

A businessman turned coffee grower, Addisu was one of the first to set up a private-run coffee estate in Kaffa in 1998 following the government reforms that then started opening up for private investment into the sector. Stretched out on 250 hectares, he has slowly been planting the lands run under the LemKeffa Coffee and Spices Agro Company. Today, production is picking up with most of the 220 hectares planted with coffee in production and visitors to the farm are in for a unique experience. Still a bit of a novelty in the specialty industry the name of Kaffa coffee has rapidly grown over the last few years and for good reasons: this is where scientists and researchers say the source of Coffea Arabica can be traced beyond evidence based on the reasoning that the source of origin for a species is defined according to where the species is find in its widest extension. Africa’s biggest coffee producing country has gotten bigger and the world of coffee has been rejoicing around the growing volumes not only of Ethiopian coffee available in the market, but the improvements starting to show for the specialty grade beans also expanding in both lots and quality. And as the attention to improved agricultural practices is growing, Ethiopia’s coffee industry is …

To read the article in full for FREE please go to Page 40 on the magazine web site;http://www.elmundodelcafe.com.mx/R/96R/index.html 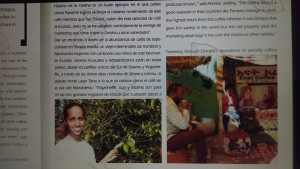