THE COFFEE MARKET EXPLODES IN CHINA 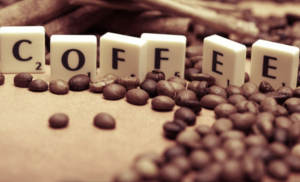 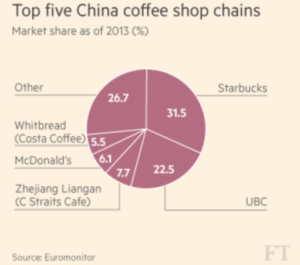 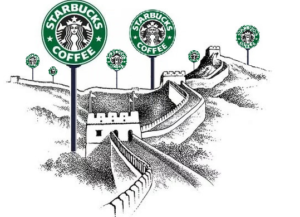 COFFEE CONSUMPTION IN CHINA
China has long been, based on its history, a tea drinker country. More than 2700 years BC in China, the mythical emperor was known as the Emperor of the Five Grains also called Shennong, discovered accidently the tasty flavour of herbal tea when a Camellia tree leaf fell and infused in its warm water cup. Tea was initially used for medicinal purposes, then for art and is now consumed every day by Chinese people.

It goes without saying that the hot drink market in China is mostly filled by Tea market shares. As you can say see on the table below from the International Coffee Organization report and Euromonitor Data, coffee sales only account for about 10% of the whole market while 45% of hot drinks sales (shops) are dedicated to coffee cups.

According to the Coffee International Organization, in 2014, coffee consumption has been increasing 16% per year from 2004 to 2014 and reached almost 2 millions of bags of coffee in 2014. China is now believed to be the 17th largest coffee market worldwide with about 5/6 cups of coffee consumed per year two years ago.

The retail coffee market has long been driven by instant coffee products which make up of 99% of the market in China stated by the Euromonitor report. Only about 1% are coffee beans products. This premium coffee is consumed by a few Chinese consumers. In 2015, instant coffee sales grew by 3% compared to 6% the previous years and even 11% in 2011.

The main player in the instant coffee market is Nestlé with a market share of 72%. New players have entered the market but Nestlé still leads the game thanks to its expansion of Nespresso in China. Coffee beans market is expected to grow by 17% ( CAGR – volume) this year.

Even though the coffee retail market is saturated on the instant coffee side, there are still plenty of opportunities for coffee shops and fresh coffee brands. According to Euromonitor, coffee cups consumption will increase by 18% per year from today until 2019.

COFFEE SHOPS IN CHINA
The Chinese coffee market has been growing these last few years. A lof of investment has been made in China by foreign brands. Yunnan province, located in South West China is the favourite place to produce coffee. Actually, 95% of the locally produced coffee is located in this province. The province even created the Yunnan Coffee Exchange association which reported an investment of 480 million USD by 2024. The main objectives are to help coffee farmers, expand the plantation lands and improve coffee planting conditions. Also, Brands such as Nestlé and Starbucks created coffee factories in the Yunnan Province and do most of their production there.

With the rise of the Chinese middle class and an overall better standard of living, coffee shops have been opening hundreds of new stores all around China. And this, despite the price of a single coffee cup which costs about 30 RMB. It is about 3 times the price of a warm green tea cup bought from a drink store outside.

An analyst from BMI Research (London, UK) shared with FT newspaper, that “the Western lifestyle is attractive to all those upper- and middle-class urban consumers.” The main coffee shops in China are Starbucks, Costa Coffee (Whitbread), UBC, McDonald’s, and C Straits Cafe. A fourth of the market is occupied by other smaller coffee shops. Starbucks is the leader of the market with 31.5% market share in 2013. It should be noted that most of these coffee shops chains are located in big and middle-sized cities in China. Rural areas are unfortunately enjoying less growth in income and are less used to foreign lifestyle trends.

STARBUCKS, THE LEADER OF THE MARKET
starbuckss

Starbucks, a global American coffee chain with an incredible history, opened its first store in Seattle in 1971. As of June 2015, there are 22,519 Starbucks coffee shops all around the world. As for China, it is the home of more than 2,000 shops in about 100 cities in Chila. The CEO of Starbucks, Howard Schultz announced early January this year while visiting China that its company will open 500 new stores annually by 2021. This will double the number of Starbucks outlets in China.

How did they make it work? The main reason for the success of these foreign brands is that they understood how the Chinese market works. They have a strong presence on Chinese social media and adapted their menu to Chinese tastes. In Starbucks for example, you will find a Macha Tea Frappucino. They also have a social media account on Sina Weibo, one of the most important social media platforms in China with more than 222 million active users. The brand is actually named “Papa Star” (xing ba ba -星爸爸) by their 127,000 WeiBo followers. As you can see from the image below they try to engage their followers by asking them questions. “Do you prefer strawberry ? Lime ? Chocolate? Comment below the frappuccino you like !”

Other brands, mainly from South Korea, have made their entrance in the coffee shop market in China. The main players are Cafe Bene, Maan Coffee and Tous Les Jours which have a different environment in comparison to other foreign brands. South Korea is intriguing for Chinese people. Korean pop music and Korean dramas are widely popular in China. Visiting a Korean coffee shop is like visiting the same places as their favourite actors.

From all of this information, we can see that China may be one of the most promising markets for international coffee shop chains. The improved standard of living as well as the presence of Chinese millennials who are more seeking for adventure, freedom and untypical experiences, will help China to grow as one of the top coffee shop markets in the next 10 years.

If you are looking for a Digital Marketing specialist, don’t hesitate to contact us …

LEARN MORE:
The coffee market in China
How Starbucks is different in China
10 mistakes to avoid when building an SEO strategy in China

The coffee market explodes in China