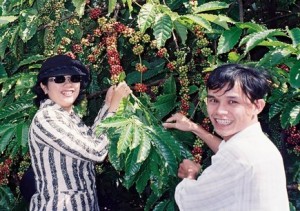 The first new coffee plantings were launched in northern Nghe An province as early as 1973. After the end of the war the Vietnamese government quickly moved into the Central Highlands in Southern Vietnam which would develop into the main coffee growing area over the next three decades. By the 1999-2000 crop cycle the record yields harvested in Dak Lak province had made Vietnam the largest Robusta grower in the world and the second overall after Brazil.